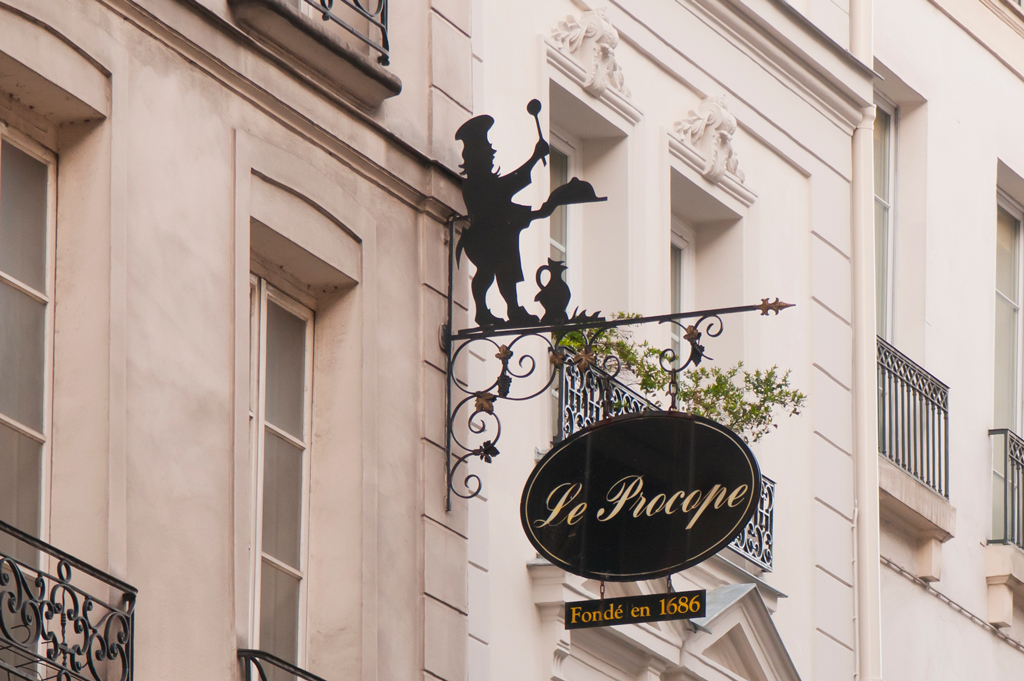 Listen up:  a café is not a bistro, nor a restaurant, nor a brasserie, even less a caberet. Here we’re going to focus on cafés and what constitutes their essence:  that grain brought back from Arabia by the Venetians.

First, a random fact, the consumption of coffee came into fashion at the dawn of the reign of the Sun King. In 1669, Mahomet IV’s ambassador gave Parisians the taste for coffee. To generate public interest, the drink had to first pass by the not-to-be-missed Saint Germain fair, where the Armenian Pascal offered tastings of this bitter drink. Several Armenians followed suit, but it was a Sicilian, Francesco Procopio dei Coltelli who really brought coffee to the Paris masses, in 1686.

Taking over a shop opened by the Armenians, rue des Fossés Saint Germain, he created the most trendy place in Paris. Three years after his arrival, the real tennis court opposite his café became the Comédie Française and opened its doors, on 28 April 1689, with Racine’s “Phedre” and Morieère’s “The Doctor in Spite of Himself”. Needless to say, the Procope became the Fouquet’s of its day.

In a luxurious, refined setting, and reserved for the elite, the Procope was destined for a centuries long future. In 1700 the Comedie Française switched Banks, but the Procope remained the meeting place of free spirits such as those of the future encyclopedists. It then became the home of political debate, the general headquarters of Danton, Desmoulins, Marat… It’s said that the first Phrygian cap was worn here by a chap named Julian.

Surviving the Revolution, the Procope would be treasured by Musset, Sand, Gautier, as well as a young Gambetta. The café was sold under auction in 1890, and acquired by the social security office! The place sat fallow, until it was purchased again in 1940 by a Madame de Jonquières. Today, it is an insipid brasserie for tourists but at least its noble history remains intact…